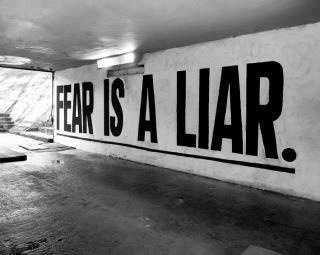 What do you do when fear comes knocking? This week I was told by my doctor that the blood supply to my brain may be insufficient at times. While this isn’t a major problem right now it could potentially become one. I won’t go into all of the medical explanations but will just say this, I thought I had covered all of the facets of fear my disease held, dealt with them, and filed them away. I was wrong, and this sent my blood pressure rocketing skyward. I am unable to control this situation. I am unable to DO anything to prevent or fix it. I have been here so many times and yet every time fear comes knocking and I answer the door I am unprepared.  My brain struggles against what I know to be true. I need to just be still and rest in The Lord. It’s one thing to write about it and another thing to live it. So, I share with you, in authenticity and transparency, today.  Here I struggle. Instead, I need to take my own advice from last Sunday, when I had no idea what the week would hold and I posted don’t worry about anything, pray about everything. When fear comes knocking it’s easy to let your brain run away with the “What If” game. You launch yourself ahead of God’s plans for you, you assume the worst, and you come to conclusions without ever stopping along the route to listen to what God has to say about it. I can’t imagine that I am the only one whose brain functions this way. This is my brain on default mode, hurtling into the future trying to sort out answers and solve problems, even before they exist. I have to make a concerted effort to say “STOP!” When fear comes knocking I have to ask, is this perception or reality? Is this of me or is this of God? If it’s fear, I can assure you it’s NOT of God. He doesn’t want us to live in fear. Verse after verse in the Bible Jesus tells us “do not be afraid.” But fear is a very real part of our lives. We can expect it to show up but we can’t allow it control us, not our thoughts, our actions, or how we live every day. This, at least for me, takes a concerted effort. It takes a conscious decision to let God have control of whatever is causing the fear. In this case, the very way the blood courses through my veins and arteries. And an even more concerted effort not to take that fear back after I have released it, not to obsess on it, but instead to pray over it. We are to turn our fears into our prayers. We aren’t to bottle it up, but let it out. Let it flow from us to the very throne of God. Let your fear drive you to God, not to madness. I speak those words to myself, afirm what I know to be true, and crawl towards God, worn down and worn out by the out of control spinning of my own thoughts.

Here is something, written by David Jeremiah, that I bookmarked a month after being diagnosed with Takayasu’s arteritus a year and a half ago. I refer back to it whenever I need a reminder of how to dissipate fear, how to rob it of the power it holds over us. “When fear is on your doorstep, express your faith. David said in Psalm 27:1, ‘The Lord is my light and my salvation; whom shall I fear? The Lord is the strength of my life; of whom shall I be afraid?’ We know David is in trouble and fear is knocking on his door. The rest of the Psalm speaks of his enemies and trouble. Yet, here he is expressing his faith out loud and aggressively. He is saying what he knows, even though his feelings don’t match what he’s expressing. We can’t have a blind kind of simple faith that’s not objectively attached to anything and get through fear. Jesus says that as a believer in Him, you don’t go through trouble alone. In the midst of his trouble, David can say, ‘The Lord is my light and my salvation, and I know that I don’t have to be afraid.’

Can a person just stop worrying and start trusting?  One day I read something that impressed me so profoundly that I haven’t worried since then. It said: ‘A man of God in the will of God is immortal until his work on earth is done.’ What that meant to me was that as long as I am a man of God doing the will of God, nothing can touch me until God is done with me. When He’s done with me, I don’t want to be around anymore.”

That is so profound to me. If I am in the will of God, going where God wants me to go, I can be sure that God knows what He is doing with me. Even in sickness and sidelining. Even when I don’t like it or understand it. God knows what He is doing and I don’t have to be afraid. And I will keep professing that until my feelings catch up with my words and embrace it as truth.  Some days it takes longer than others.

One thought on “Knock, Knock”